A recent comment here has alerted me that our very own little and insecure internet terrorist Kal K. Korff has thrown a bit of a legal wobbler in a very very very long line of legal threats. It is really clear to me at least in my opinion that Kal is much like a terrorist waffling on about this and that. I personally and reluctantly would give a real terrorist more credit than Kal because at least a real terrorist isn't a waffling wanker and actually delivers from time to time. Real terrorists are twats and richly deserve a bullet in the skull. Internet poseurs like Kal are a dime a dozen. Kal isn't the first idiot to wear some store bought military surplus uniform while trying to convince someone or anyone that he is involved in some sort of secret intelligence agency. As if anyone involved inthat line of work would besom public about it squarely painting a bullseye on his arse. Total pants and he knows it but just won't admit it because what else does Kernal Kolon really have? Nothing apparently.

It might or might not make you wonder why Kal would emulate many traits of a terrorist like making threats in order to have some chap take a certain course of action or posing in voideos making demands and threats. Yes Kal's tactics and internet terrorism amount to sod all but ultimately Kal's threats of exposing this and that and suing this person and having them arrested and charged and the like all under the guise of consumer protection and truth really do amount to nothing less than terrorism. Ironic that Kernal Klutter does the very thing he claims to fight against. Yes yes yes we all know how daft Kal's utterly ridiculous claims about fighting terrorism are but there is a mountain of irony to be had with Kernal Kornhole.

Luckily Kal's smokescreen of being someone important with some sort of actual authority is readily seen through by even the most daft. Hello Kal we all see right through you and everyone knows you've completely fallen off your trolley.

Quote of the year about Kal must go to that Kevin Randle lad who said "Sometimes you just have to risk the wrath of the unwashed to make an important point." ahahahahhhaaa The mutt's there!! ahahahaaahhhaa

Kal can't even succeed at being an internet terrorist! Try anew reality show Kal where the life of a lone nut pretending to be a colonel in an imaginary organization is shown as the lone nut stumbles through life in a delusional haze. It could have comedy and drama and show the darker side of life of those pretending to be something they are not and never will be. Seriously Kal people love that sort of stuff. Just be your everyday ranting and stark raving self and the fame you so desperately seek might be yours. ahahahahahhaahhaa
Posted by Kal is an idiot at Wednesday, June 23, 2010 94 comments:

Crazy Kal has failed to deliver on everything from promised lawsuits and criminal charges to calendars and books and beauty products and new gigs and and and and you get thepoint I think.

There hasn't been one thing Kal has ever followed through with that he has promised that I am aware of. All utter codswallop from Kal. Delusions of grandeur as I see it and I don't think that Kernal Krazed will be stopping any time soon so long as someone and I mean ANYONE will pay him a meager speck of attention.

So there Kernal Hornblower where are all the books and DVDs and lawsuits and criminal charges and the rest of your nonsense to be found? As with the rest of Kal's utter bullocks none of it is to be found other than in the imagination and fantasy life of Kal.
Posted by Kal is an idiot at Wednesday, June 16, 2010 23 comments:

Kernal Troll slithers out from under his rock 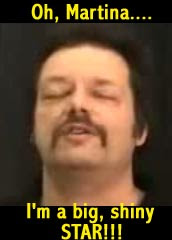 So I see the bloody raving lunatic has finally slithered out from the rock he has been hiding under. It was just a matter of time lads. Just a matter of time. And it is bloody clear the fool reads this blog. Kal has no real existence without us. Kernal Klink has to seek justification for his very existnece through "friends" on facebook and has to come here to this blog to find the one thing that he must have as a constant in his sad life.........an enemy. Someone to focus upon.

I have taken note with Kernal Kream Pie's shift to focusing on hot button topics to get attention from anyone. Kal is desperately reaching out to anyone he can get to be his "friend" on facebook. But Kernal Kornblower's excuse about a facebook investigation makes not a lick of sense. Why would his account be gone for so long if someone else was being investigated? ncie try Kal but no one is going to buy into a thing Kal says.

interestingly enough now the banal little creep is agin trying to impress all with his announcement of a pending talk show. ahahahahahahahahhhhaaahahaha Anyone can get an internet show these days even a buffoon like Kernal Krack Krawler. So it looks like we are back to the same bloody rubbish Kal has been pulling out of his arse for years now which is more boating, more promises and little to no delivery.

You are a joke Kal and everyone knows it except you.
Posted by Kal is an idiot at Tuesday, June 01, 2010 53 comments: