Kal Korff gets booted from Xzone? 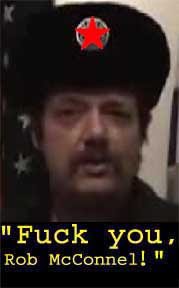 I do not think it will be too long before you hear Kal screaming "Fuck you Rob McConnell!!!!" in a future video shot by Kalvin on location near a small bathroom in a flat somewhere. People leaving comments on this blog say they have received messages from Xzone radio host Rob McConnel where McConnel is saying ""Kal is no longer associated or affiliated with The ‘X’ Zone in any manner." <<< WShen asked why Rob McConnel has replied "We are no longer doing anything with Kal Korff" and "All questions will be answered in an up coming expose on Kal Kaorff." I do wonder if anyone else might perhaps recall a similar event where Rob McConnel said Kal would no longer be on the show? Did that happen or am I just confused? Likely just confused but I think I am more confused as to why Rob McConnel would boot his "good buddy" Kal from the show. Rob McConnel was a big advocate for Kal defending him from what Rob called "more crap" from people criticizng Kal's obviously imaginary foray into the world of nanotechnology and counter terrorism. I guess though we shouldn't expect much from Rob McConnel who promised to investigate Kal's claims but never did much like Rob McConnel's failed promised to have a lab at a university look at some bits Kal sent where Kal claimed the bits to be nanotechnology. I agree with the thought of Rob McConnel not being very responsible in his hosting duties and enabling Kal to live out these ridiculous fantasies on the air. Rob is a radio host who was apparently wanting to stir some sort of controversy on his show using Kal as the center piece in what I think to have been a pretty poorly planned attempt to boost the ratings for the show. Think about it. Rob McConnel has nutty Kalvin Korff on accusing people of being terrorists and frauds and exposing them. The people Kal went after reacted like anyone else and then Rob is challenging people to come on the air and debate Kal. Rob gets no takers because no one wants to waste their time with a washed up computer tech support idiot who had a few poorly written books publsihed and they don't want to give the nutty little fuck an ounce of attention so Kal now has an excuse to continue iwth his bizarre behavior and outright hateful rantings. No one bites, Kal runs from his debate with Kevin Randle, Kal doesn't show for a couple of shows, the debate with this Mike Horn guy never happens, Kal fails to deliver on all the promises he has made, and there you have it. Rob likely has figured he has scraped every bit out of Kal he can get and what is even funnier is that Kal fell for it. Whoa. A SAPSTOE getting taken by a fifth rate late night radio goofball. Ouch. And how embarrassing is it to get booted from the xzone where psychics and a guy who thinks reptiles are secretly ruling the world will still be appearing. ahahahahahahaahhhaaaa So I suppose it is only a matter of time before we all get a taste of how Kal is going to expose Rob McConnel and that Kal was working undercover on the show so he could "nail" Rob and expose the show as a fraud in as yet some unnamed mega book, movie, television, and media deal. It was Rob McConnel's choice to give his "European Bureau Chief" the big boot to the ass. Now will Rob McConnel be prepared to deal with the same treatment Kal has given to others who Kal through his warped thinking have betrayed him? I think if it does happen that Rob McConnel deserves it for stringing Kal along and allowing the dolt to endlessly ramble on the air. Looks like the love affair that was Rob and Kal has come to a close................................................................ 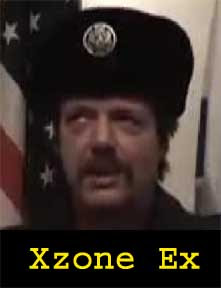 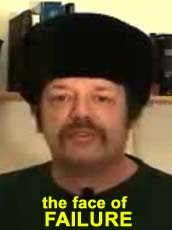 Here we are lads at the 166th piece written here about that numbskull amateur ignoramus Kal Korff and where are we? Perhaps the question should be where is Kal at on all of his promised projects and various other suspect threats??

We can start with what is perhaps the most fucking ridiculous claim of all made by Conniving Kal and that being he has a 500 book publishing deal. So just how many of those books have we seen in print? So where is one of the 500 books Kal claims to have a deal for? Just one book Kal is all I am asking for. A single bona fide published book. There isn't one. Video of Kal sending off his book to his publisher? Nowhere to be seen. You actually have to have a publisher first and Kinkos or babbling on an Adobe document doesn't count.

My other two favorites here and this is a tie are the KPMG audit of Kevin Randle and the lawsuit against Royce Meyer Kal promised repeatedly. What happened Kal did bigfoot or the loch ness monster run off with these? I only ask this because of your unwitty reference to aliens and flying saucers when you claim those you hate have no proof. Where are these two things you PROMISED Kal???? Where???? Just like Kal's imaginary IQ they don't exist and never have!!

A favorite among those in the Czech Republic is what ever happened to the 10,00 English phrases Professor Butt Monkey promised??? What about the missile defense interview that mysteriously NEVER turned up on the BBC??? And do tell us Kal please whatever happened to the evidence that you were EVER involved in either of the O.J. Simpson cases??? For those of you not all that familiar with Kal and his hypocritical practices Kal is infamous for holding people to proving their claims but when it comes to Kal proving his claims he never is obligated. Thanks to a variety of people who leave comments here and have other blogs at least the TRUTH of Kal's actual temporary third party contractor work at Livermore Lawrence Laboratories was EXPOSED for the ruse it is! Your claim of working for and being involved on top secret projects Kal is disingenuous on your best day.

Someone call the police because Kal's police complaints against F1 racer ,David Beidnny, and a whole lot of other people are missing!!! There are too many police charges and reports Kal has claimed to have filed against a bunch of people. None of which are true and Kal is consistent for promising and not delivering. F1 racer was supposed to have had a "date" with the Czech police but the police seem to have not received an invitation to this "date".

Kal enshrines himself in infamy for trying to get people in trouble and making FALSE CLAIMS of having them arrested. If Kal ever threatens to sue you or have you arrested or says he is going to call your employer and file a complaint against you be assured you can laugh it off as meaningless.

What did happen to all of Kal's big talk about Paul Kimball being exposed? Where is all of this material Kal has been promising about Paul??? You are a tad late Kal because we already all know Paul is a filmmaker so it is back to the drawing board with you.

Where is Kal's syndicated column, radio show, television show, reality television show, and where is this $25,000,000.00 budget? If you have that much money then why do you need to sell ipods and reportedly steal them??? Where is this big investigation exposing Milos Bartu??? And did Kal not mention he was getting Milos's business shutdown and that it had all been reported to tax authorities and Apple??? If Milos is feeling the bite he isn;t showing it because his business is still up and running. And what happened to Kal's five-year deal with Vojtek and his positions as CEO and CIO and whatever other acronyms Kal dreams about??????

For the love of god I could go on forever with any number of the claims Kal has made that have NEVER HAPPENED and NEVER WILL. Kal is a legend in his own mind or at least what is left of it. How many people here can comment on other things Kal promised but has FAILED TO DELIVER on????? Kal "FAIL" Korff seems a rather appropriate name yes?
Posted by Kal is an idiot at Monday, April 13, 2009 44 comments:

Paul Kimball's new movie about the life and time and state of Kal Korff is coming out shortly. I did notice Kal wrote on his Internet website some silly letter he supposedly received where Kal claims Paul Kimball has apologized about being wrong when he said Kal was not involved in the O.J. Simpson case. Of course the letter is a complete spoof written by none other than Kal who had some amazing control by not USING ALL CAPITAL LETTERS at all. Kal makes cracks about Paul's "balls" and other childish remarks in the usual fashion of idiocy we have all grown accustomed to where Kal comes in. Get some new material Kal you dolt.

Rumor has it the Kal Korff documentary by Paul Kimball will appear by next week.
Posted by Kal is an idiot at Tuesday, April 07, 2009 35 comments: