"I volunteer because no

one will pay me." 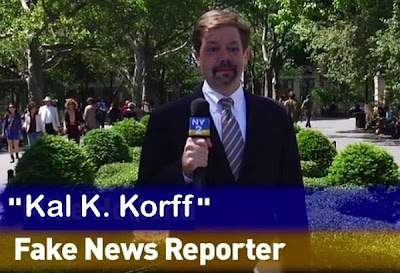 Let's reach way back to Korff's Boeing days shall we.... Kal K. Korff can be reached at

It's interesting that if you look up where Korff lived while he worked various low level jobs, and he held a short term position with Boeing, Korff lived in a shabby little apartment, about 12 miles away from Boeing and just as close to the other low level security guard jobs he held, etc.

How do we know this? We did an audit on the names associated with a few months worth of articles posted on their web site. We came up with over a hundred different “reporters” “columnists” “editors” and “journalists”. Rarely did a name come up twice.

We then did some searches (Facebook is a wonderful research tool) based on these names and we found many of these names listed as students (involved in various activities) at schools located in and around the location of Korff’s media giant.

We then did some searches based on the names of the people claiming to have “founded” the media giant; Manish Tiwari and Ashpinder Sehgal. Guess what, like Korff, we found listings for them as guest speakers at various trade schools and colleges in and around the area as they recruited people to write articles for their newspaper, free of charge.

We have to admit, this is a very clever way to supply their “newspaper” with a full pipeline of material at almost zero cost to the company.

Of course, that volunteer Analyst, Counterterrorism Advisor and Specialist position was not a volunteer position back in 2010. No, Korff was a high level and very important analyst. It was only after we launched the Korffie Leak web site and started poaching Korff's videos that Korff "added" this bit to his ever changing resume.

We remember another example of Korffing elaborating on his past lies when he told Rob McConnell that he (Korff) was just giving the info to "others" to sue Don Ecker, Billy Meier, Royce Meyers II and a long list of others and if "they" didn't sue them, it was not their fault and it was out of their (Korff') hands. Sorry dummy, you claimed that you we're filing the papers, that your team of lawyers (based in , , and elsewhere in the world) were suing these people. It was only after McConnell started putting pressure on you to substantiate your claims and only after the Korffing Syndicate whacked you hard that you "added" this claim to your lie.

Blast from the Future

With pride we present a new post from the once and always great and powerful Korffer Brad Hudson.

Bradley Hudson posted this to our Kal

Well, we're 114 days away from the 50th Anniversary of the assassination of JFK on November 22, 1963, and seeing as how "solving" this mystery (only 29 years after the Warren Commission said the same thing Kal did) led to Kale’s appearance on Larry King for the 30th Anniversary was the zenith of Kal's "career" (ever tell your FB friends that profile pic is 20 years old, Kal?), will Kalvin K. Korff (aka Kal Israel, Krav Maga master, Colonel of the Kidon Unit of the Israeli founded Special Secret Services, award winning journalist, and Savior of the Earth, the Solar System, the Milky Way galaxy, and, what the hell, the galactic Local Group as well) be able to resist the Sirens song, begging him to slither out from under his Indian rock to bask once again in the glory he so "rightfully" deserves and take his deserved place amongst Einstein, Newton, Copernicus, and a host of others in the Pantheon of those that changed the course of humanity?

Not a chance in hell. Korff-Watch 2013 is officially on, and since I'm a lifelong resident of Dallas I'll be glad to glance around Dealey Plaza whenever I'm driving by, but I doubt I'll find Korff hiding in the Grassy Knoll, or anywhere else in a 2000 mile radius of the Texas Schoolbook Depository.

But be on high alert, fellow Korffers, the chances of the "Colonel" reappearing are at an all time high.

By the way, does anybody know who 's answer to Larry King is? I'm sure "Kolonel Krackpot" is angling for a guest spot as we speak.

Bradley Hudson thanks for checking in and leaving such a wonderful note! But please watch yourself my Korffing friend. Kal K. Korff will threaten to sue you (again) and threaten to call your place of employment (again) and never follow through with any of these threats (again and again and again)... Thanks for the countdown update. I think the Korffing Syndicate may have to ready a new thread for the blog in celebration of Korff's, as you rightfully state, zenith. Korffing for a Korff Free Internet.

http://kalisanidiot.blogspot.com/ Kal Korff is an IDIOT

Lol. Nah, Kal's long since given up making any kind of threats towards me ever since about 5 years ago when he asked in an email "how Satori Group would feel knowing one of their employees used unsolicited anti-Semitic hate speech online towards an Israeli citizen". I replied to him with our toll free number and told him to feel free to call anytime to speak to the firms owners. Since Satori was an ad agency owned by me and my wife.

++++++++++++++++++++++++++++++
As you can see, when Korff was presented with a resolution to his issue(s) or threat(s); here's the phone number, here's my address, appear on my radio show to debate this, etc. Korff would run away after making excuses as to why he couldn't follow through with the final and public, face-to-face resolution.

After the Korffing Syndicate took control of Korff's URL's; www.ufowatchcat.com and www.freekurtis.org, took control of his internet video presence and we launched the Korffie Leak web site, Korff went away, for the most part. No more threats, no more claims and lies (again, for the most part). Why? Because we followed through with our resolution to his lying problem. Korff proved himself as too much a pussy and man-child to stand up and prove his claims (or apologize for his threats and lies) in public, like a man.

Kal Korff ~ July 23, 2012
Hi everyone. Today, I am honored and humbled to report that I have the LEAD STORY story in the newspaper Daily Post. The subject will surprise many of you who usually read my published articles and exposes.

I will be meeting with a key representative today concerning what was found in PepsiCo's product "Nimbooz" as this article exposes. The purpose behind the meeting is to get their version of events and to push for SAFER HYGIENIC BOTTLING of their products for the safety of the public. We are holding the contaminated bottle as evidence.

Here's the image of the article. Daily Post is 's fastest growing English language newspaper. I negotiated the contract with Pepsi along with a colleague of mine that I supervise, to supply our canteen. I have since found several problems with their products and for the benefit of consumers in general will explain the results of our investigation to them. I'll give an update later as is logical. 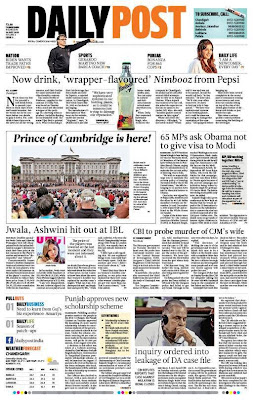 Before we start, notice, no direct link to the paper...
Always hiding the "media giant" from his Facebook friends.

So what Korff is saying here is that he "negotiated" the deal to bring a Pepsi product into their break room at the “media giant” he insists he works at (but refuses to share any proof of, like a photo from their recent 2nd anniversary launching party) or any photos of any kind. Smart move Korff. In any case, Korff, being the super sleuth that he is, claims to have uncovered some less than hygienic issues with the bottling of this product. You're fucking kidding me! A problem with hygiene in ! Say it ain’t so Fecal-Boy. Remember, which hand did you wipe with, which hand did you eat with… very important.

If you'd like more truth you can go to this site for a run down on this product. Maybe an e-mail to the India Pepsi people is in order to inform them that their product is being besmirched by Kal K. Korff.

We thought we would put up a new thread while we process a very large Korff related database that has been sent to us by a new member (and very public figure) of the Korffing Syndicate. This new material will take a massive effort to sort through and collate into something manageable and easy to navigate.

Kal K. Korff is going to go ballistic after we release this material. Korff will have no way to respond to this information (with his response left unmolested) unless he plays ball with the Syndicate. If Korff attempts to use FaceBook, Youtube or any other type of social media, we will take that material and edit in the truth. Korff's attempt to set his record straight will fail. Korff will lose, yet again.

You might want to get that book, or series of books on terrorism, haters and consumer fraud, and that Obama book, and that 9 volume Roswell book series, and that 32 volume Billy Meier book series published first before making yet another promise (positioned as a joke but we all know it’s not meant as a joke) that will ultimately be broken.

Kal K. Korff, “This was my fourth book.”

Korff is referring to his book, "The Roswell UFO Crash: What They Don't Want You to Know” published in 1997. This is not his fourth book. Korff didn't author 4 books. Korff wrote a pamphlet on the Billy Meier case called “The Meier Incident - The Most Infamous Hoax in Ufology!” while still in high school.

After graduating from John F. Kennedy high school, in 1980 (not in 1979 as you claim) Korff wrote another book on the Billy Meier case, “Spaceships of the Pleiades” published in 1995.

Korff then wrote a book on the Roswell UFO crash called, “The Roswell UFO Crash: What They Don't Want You to Know” published in 1997.

So, Korff's claim that “The Roswell UFO Crash: What They Don't Want You to Know” is his fourth book is a lie. And easy to prove and blatant lie. Another HUGE lie is the lie Korff floated stating that he had a contract to publish 500 books, from various publishers (all working together, another first, to pool their money and efforts together so they could afford and handle the task of publishing such a large and important amount of material). Korff also elaborated on this lie with another lie; 2007, "CriticalThinkers has now ACQUIRED Knihovnik Press. This means that I, Kal Korff, am now a publisher."
Kal K. Korff continues to refer to his “wife” as a thing (with no name or any reason to exist than to be Kal K. Korff's wife. And Korff still refuses to share a photo of his “Indian Princess” with his  Facebook “friends”. His Facebook  friends remain heartbroken to not lay eyes on Korff's Indian Princess.

Kal K. Korff continues to show his hatred towards gay people.
Korff was asked to answer for this hatred and Korff remains silent.

Kal K. Korff continues to use a photo of himself (from the
last century) on his "articles" posted by his media giant.

Kal K. Korff still living in the 1990's (posting photos decades old) and hanging onto his past meager accomplishments and minor celebrity when he could still get on television and fool the people that he, Kal K. Korff was the "go to" UFO expert. Korff’s last public media appearance of any kind was in 2002, on a UK-based radio station. It’s over Korff, embrace the now, and embrace the fact that you are a has-been and a hardly ever been.

Stay tuned for a massive release of material on our favorite Village Idiot.