So where it is Kal?? Where is the lawsuit against Don Ecker? Where are the legal papers you promised Don Ecker would be served? Where is all the media attention you said Don Ecker would be getting over you suing him? Where is it Kal? It is up your arse Kal along with all of the rest of your bollocks. LIAR. FRAUD. IMPERSONATOR. That would be you Kal. You don;t even have the nuts to post about it on facebook anymore. Why is that I wonder?? hahahahahhaaahhaa Is it because it isn;t true and you were told by facebook if you kept ranting with your delusions they would take away your only outlet to the world? Kal K. Korff EXPOSED again and again and again! ahahahahahahahah A you're a joke Kal! Piss off.
Posted by Kal is an idiot at Monday, April 25, 2011 60 comments: 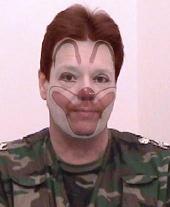 lads it looks as though efforts by fellow Korffers have finally stuffed a sock in the mouth of Kal K. Korff. No rants on facebook about lawsuits or suing Don Ecker or anyone else. This is what you get Kal when you ILLGALLY IMPERSONATE a barrister and FALSELY CLAIM to be represented by other barristers who have never heard of you!!


NO NEW JOB AS EDITOR OF ANYTHING!

You been taken to task Kal and have proved NOTHING and have delivered NOTHING. But you have been EXPOSED Kal! GOOD JOB FELLOW KORFFERS on protecting consumers from the claims and delusions of Kal K. Korff!!
Posted by Kal is an idiot at Tuesday, April 19, 2011 36 comments: 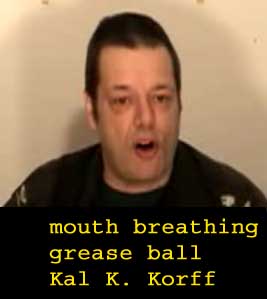 Not a single mention by bloated bollocking bum Kal K. Korff about his phony lawsuit against Don Ecker has been done by Kal as it now appears he was told by Facebook to stop or his account would be closed.

That is what you get Kal for IMPERSONATING a barrister and LYING about a lawsuit that never existed. How you must be fuming over not being able to use your only outlet to spew LIES and HATRED about the people who have EXPOSED you Kal and have EXPOSED you for the LYING FRAUD you are. Your game is over Kal. ahahahahahhhaaa!
Posted by Kal is an idiot at Sunday, April 10, 2011 26 comments:

Kal K. Korff is a LIAR and FRAUD

Here we are lads at yet another Kal Korff LIE and FRAUD with no lawsuit and no papers of any kind received by anybody at any time!! After being taken to task AGAIN and PUBLICLY by Don Ecker on his radio show Kal did the usual little dance and flirt about lawyers and suing Don and went on about it all promising Don would be served papers and sued. Kal even ILLEGALY IMPERSONATED a lawyer!!!

My fellow Korffers are having yet another laugh all at the expense of poor dumb and desperate Kal K. Korff who can't follow through on any promises. Is this the best the bloody bloke can pull out of his arse????

So now the world knows that any threat of a lawsuit of any kind from the COWARDLY FRAUD and LIAR Kal K. Korff is utter BULLSHIT.  Kal Korff is to quote Don Ecker a vicious back biting sneaky little shit and you can add COWARD to that as Kal has again ran the other way and not accepted an invitation to appear on Don Ecker's radio show. Kal claims to never run from a fight or debate but for a bloke claiming such Kal has LIED to get out of a debate with Kevin Randle and dodged Kevin in another debate offer.

There you have it lads! Kal K. Korff running scared and LYING and committing FRAUD.  Consumers beware of Kal K. Korff and his LIES!
Posted by Kal is an idiot at Tuesday, April 05, 2011 20 comments: