Fun show, we got the info out there. Korff was asked to debate the Syndicate on this show, he turned tail to lick his ass. Kal K. Korff, you are a pussy and a coward.

Here's the link - Kal Israel starts at the 26 minute mark:

We think you'll enjoy the show. Santa in a Floppy Hat called us to inform us that his drunken ass will be sending us a new video very soon...

Kal Israel will be appearing on the Mind Cemetery Show tonight from 6:00 to 8:00 PM Pacific Time.

We challenged the host to set up a debate with Korff. Korff declined, we didn't. 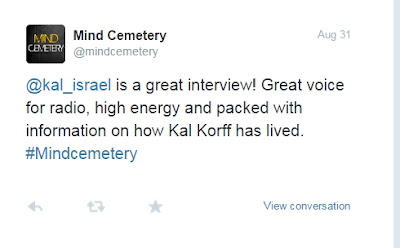 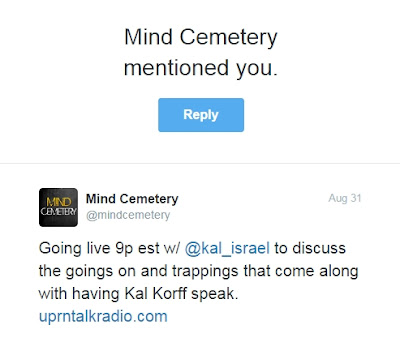 We have a new member of the Korffing Syndicate, so to speak. André is not interested in posting on this blog, etc., however, he has been taking Korff to task regarding his claims. Lately he's been pushing Korff to prove that he worked at LLNL. We will post that information at a later date. André has given us the go ahead to use and post any of the information he sends us or that we locate on our own.

Some of you might have wondered why the hell would anyone have Korff appear on their media show. Korff hasn't been seen anywhere, by and large, other than on the McConnell show, since circa 2000. Recently he did appear on something called Mind Cemetery.

André tracked down the host of this show and he asked him the obvious question; why would you have this obvious lunatic on your show? The host opened his show with a bit news from around the world and during this segment he made a prophetic statement.

"… so I don’t have to yuck it up for you folks out there who want to check out some actual decent information ... or some entertaining things… there’s nothing wrong with that… I’ve always said that multiple times…   the only thing I do have a problem with are blatant entertainers trying to deceive you into thinking that it’s actual information… when it’s actually noise”

The link to the Korff appearance is posted below, as are the other links associated with this show... just in case you'd like to ask him your own Korffing related questions.

And so, we present the first thread to utilize information from André.

I've recently (early August) had a discussion on social media with the host of the Mind Cemetery radio show which had Korff as a guest a short while ago and he said that he knew that Korff was talking nonsense but he didn't care because all he cares about is the entertainment aspect of the show (see thread below).

André Skondras - Aren't you the Mind Cemetery radio host guy who had Kal Korff as a guest but knew Korff was talking nonsense but you didn't care because all you cared about was the entertainment aspect of the show? That's what you at least admitted to me and then suddenly the thread was removed … that to me is censorship.

André Skondras - Makes me wonder how factual you are in all your discussions. I guess your radio show is THE place where the Mind stops thinking, i.e. a real Mind Cemetery. ;)

André Skondras - I wonder why I keep reacting and I probably will get the same silly replies from Korff stating that he DID work at Lawrence Livermore National Lab while extensive database and publications research from LLNL shows that he did not work there … I asked Korff if he could provide me with info about his job responsibilities at LLNL, the department at which he was employed, the names of his co-workers etc … so that I could verify this info with LLNL again … but so far, no response from Korff.

André Skondras - People should get off their asses and do research, as Korff stated on your show, so I followed his advice. However, if my research contradicts his fantasy and exaggerated claims, than my research stinks, even accusing me of making false claims, but the statements I have made are based on info I got straight from the horse's mouth. I didn't only check his LLNL employment claim with LLNL but I also did some checking re his claims about Kevin Randle's PhD. The info I got from Randle's universities all checked out and matched with the info I got from Randle.


Chip Plescher - I'm fully aware Kal is off his rocker... hence why even having him on the show... its called entertainment. At this point if you have to be told Kal is less than what he claims then I feel bad for you. you, me and everyone else know that he is pure entertainment yet you have a problem with having him on a show to be entertaining.... Sorry you cant wrap your head around the fact he was on to be entertaining.

Chip Plescher - You are upset I wont ride him off on a rail, which is pointless imo. do you really think my opinion or anyone else's will stop him? no, not even in the slightest. I was amazed he even came on to begin with LOL I figured he would at least have known a little bit about me or what I have railed on for YEARS. So, the next time you want to find your internet soap box to tell me how bad I suck ask yourself if it's really worth it.

Chip Plescher - A "Mind Cemetery" is also another term for a library used by the band Rage Against the Machine... I know its hard to, you know, "get off their asses and do research" when the low hanging fruit is so ripe huh? ;)

The Kal Korff appearence: https://www.youtube.com/watch?v=D0L0F5uKGmw
The Korff segment starts at the 18 minute mark. 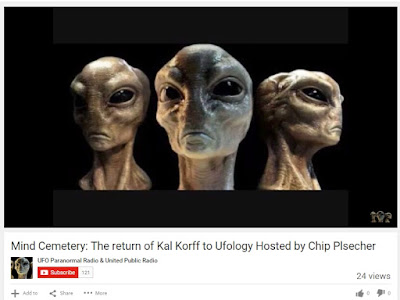