SYNDICATED MY ARSE. Kal must have received his "accredited journalist" license from a cereal box prize. I'd asked that bloated sack Kal to post links to his published material and by whom it was published through but we all know this is just more hot air coming out of Kal's own ass.
Posted by Kal is an idiot at Sunday, August 28, 2011 16 comments:

You have tried to hide and cover your tracks Kal but you have FAILED! You have tried to change your persona over and over hoping your past would not catch up with you but you have FAILED! Very soon lads there will come an ENTIRE WEBSITE EXPOSING KAL K. KORFF! Very soon the TRUTH will be revealed and Kal K. Korff will have no place to hide!
Posted by Kal is an idiot at Monday, August 22, 2011 38 comments: 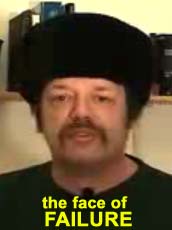 It looks as though lads we now know where Komrade Kal obtained his sense of fashion.  Many thanks to the comment poster for this. And I see Kal is still arse over tit with his nonsense about being a syndicated writer. This is BLOOMING FALSE lads and we all know it. And then there is Kal and his utter bollocks about the heli crash sadly killing many soldiers from the states.  Kal has tripped all over his own words and silly conclusions about what was really happening. Kal should just leave this sort of stuff to the REAL military people and the REAL intelligence people. You have to be bonkers to think that being a private security guard for a bank is somehow the equivalent to being a REAL soldier or serving in REAL special intelligence. STOP pissing around Kal and be a man and admit that you are a FAKE COLONEL! STOP STEALING VALOR Kal that you have never earned!  Kernal Klown is just that. 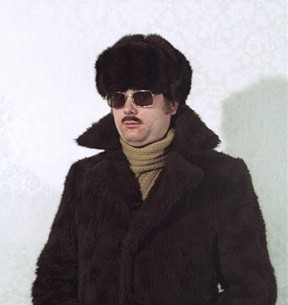 Kernal Klown needs to shut the fuck up

Kal K. Korff can't keep his big fucking mouth shut. Kal sas of the recent attack on and killing of part of Navy SEAL Team 6 "Thanks to Basic Failure In Command 101, Obama's lack of leadership facilitated this, he should NOT have re-stationed them in the area to be shit down and turned into a propaganda victory"

So Kal please do tell just what a Wells Fargo security guard who has NEVER served in the military and who poses as a FAKE COLONEL and STEALS VALOR from the REAL heroes on the front lines knows about military leadership?

Just shut the fuck up Kal. You are a nobody in the REAL WORLD and you don;t amount to a shit smear on a Jihadist's toilet seat.
Posted by Kal is an idiot at Sunday, August 07, 2011 23 comments: