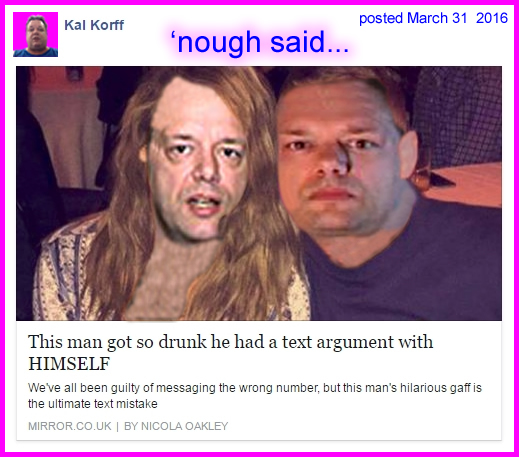 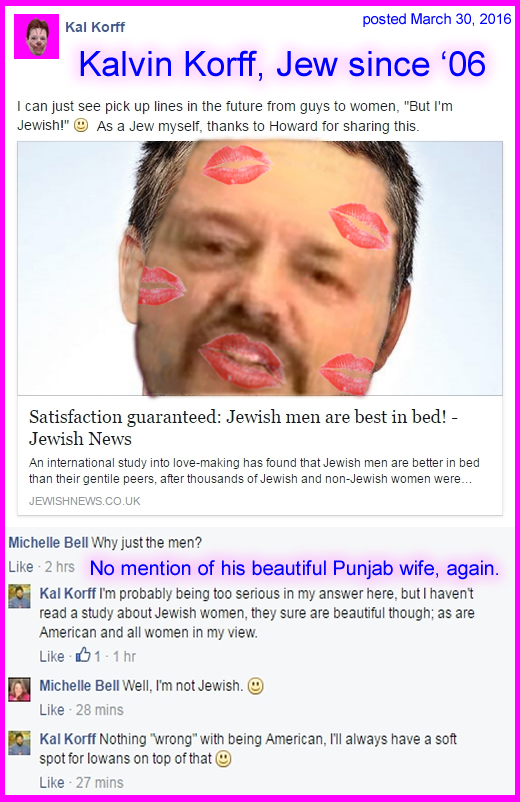 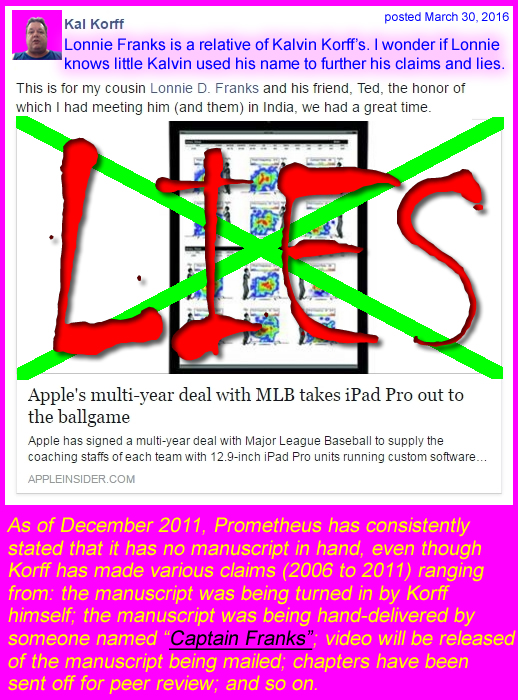 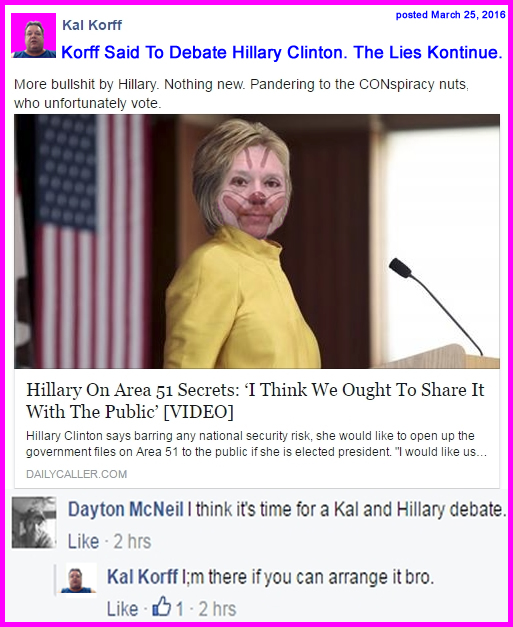 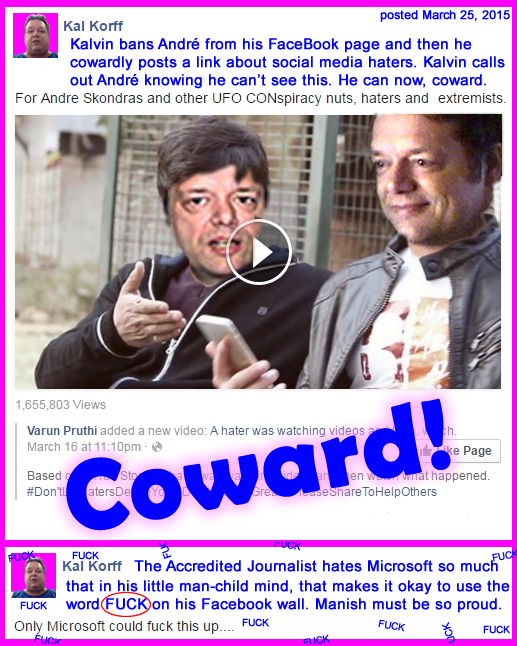 Here's proof that Korff is cutting and pasting much of the "movie" he claims to be "directing". Re-watch the Korff "directed" preview and then watch these videos to see where Korff took much of his material from. Video 1 @ 4:21 / Video 2 @ 2:48, 3:38, 5:12 and 5:18. The lies and confabulation kontinue. Big thanks to Korffer Andre for bringing this to the Syndicates attention. 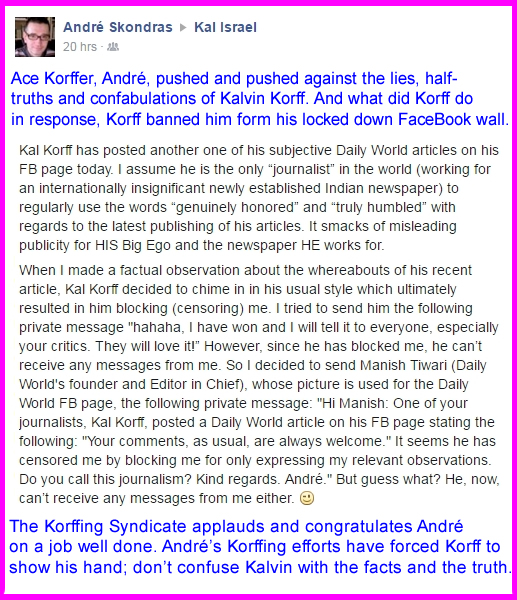 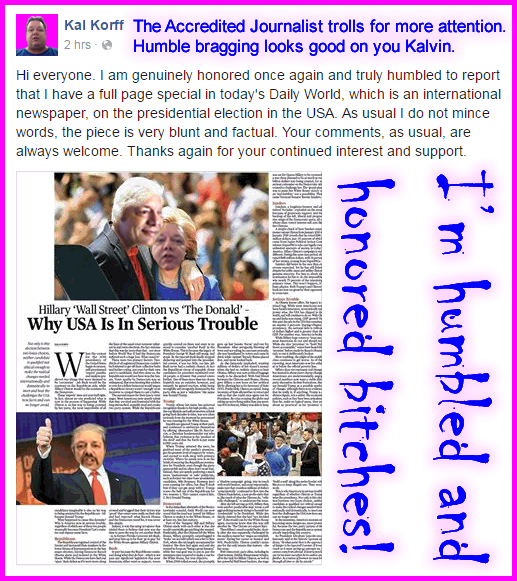 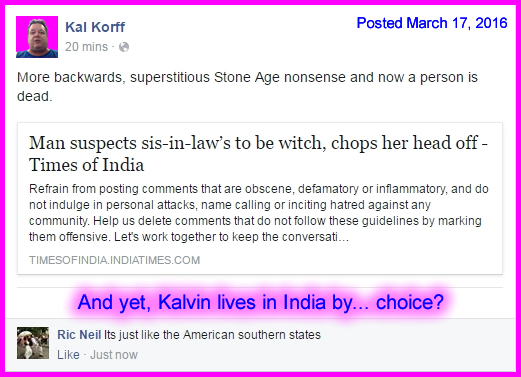 The Accredited Journalist and the Citizen Reporter - LINK 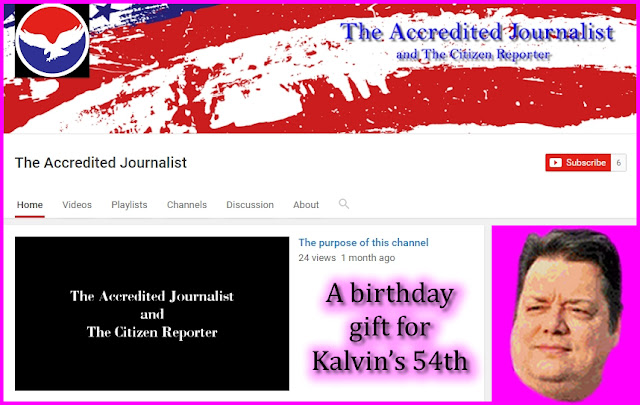 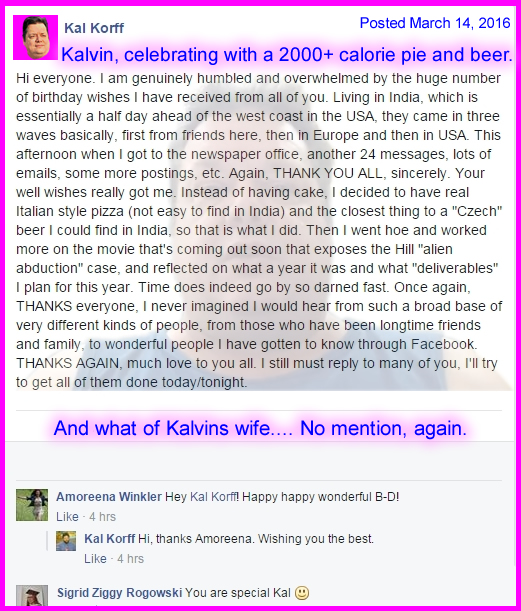 Princess - LINK / Wife - LINK
Is this a man who needs another pizza? 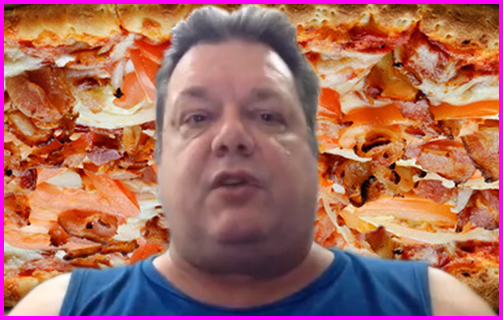 Between now and June 21 Kal K. Korff’s docudrama “The Zeta Reticuli CONspiracy” about the Betty and Barney Hill case “will" be out for public consumption. The first sneak preview was aired last January, which was, as you all may know, very hilarious. On February 21 Kal Korff announced that the second sneak preview would be out in about a week. Well, so far nothing has materialized. When I asked him about it, again, in our regular discussions on social media, he sort of weaselled his way out of it, as he likes to do, by stating the following: "Preview will be coming soon, date not set yet, and we have filmed scenes for the longer Director's Cut or Special Edition, which will be likely one hour longer …”  Not only am I waiting for the second sneak preview, but also for the new website he had announced last January.
As some (or perhaps most) of you may know, I’ve been helping out an individual who has been monitoring Kal Korff’s lying and egomaniacal behavior for some time now, so I’ve been spending a lot of time and effort writing up lengthy solid and structured rebuttals (which can be mentally exhausting) since I started my discussions with Kal Korff on FB in late last May, which have always been countered by Kal Korff with the usual distortions, evasiveness and smearing. Recently, he even threatened to block me (again) and report me to FB (which is the first time), which hasn’t happened. I told him that his threats of blocking and reporting me seems to show the actions of a very irritated and mean individual in defeat unable to factually disprove my very relevant observations.
The latest news update from Kal Korff on his FB wall re his upcoming Hill movie dates from March 9 when he posted this announcement including the picture below: "Hi everyone. Quick update on the movie we are making that exposes the Barney and Betty Hill "UFO abduction" case. As I have said, the data presented in the new movie is original material, data that has not been made public before, and can be verified by anyone wishing to do so, as all facts can be checked. Here is one set of docs, this is a report I did in eighth grade that was 213 pages long, :) the highlight of which was the Hill case. Betty Hill contributed material for it. Here's a photo of the report which was written back in 1976, I got an A+ grade on it :)”  According to Kal Korff this picture “proves" his early Hill “research”, which is in fact a school project which he made in 8th grade in 1976 passing for real active research and all one can see is a picture of a portfolio with papers presented as proof for what? This picture is as hilarious as was his first sneak preview.

We assist Kalvin to tell the truth. 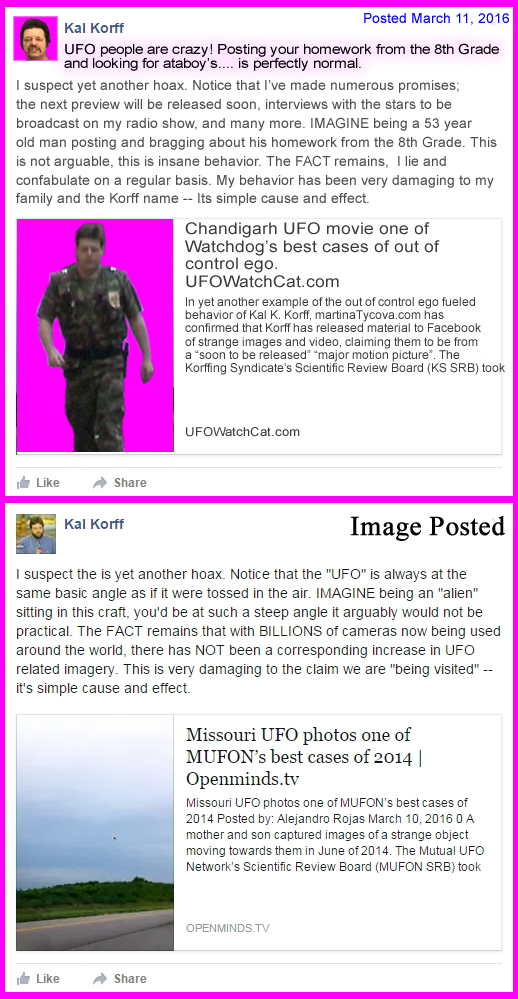 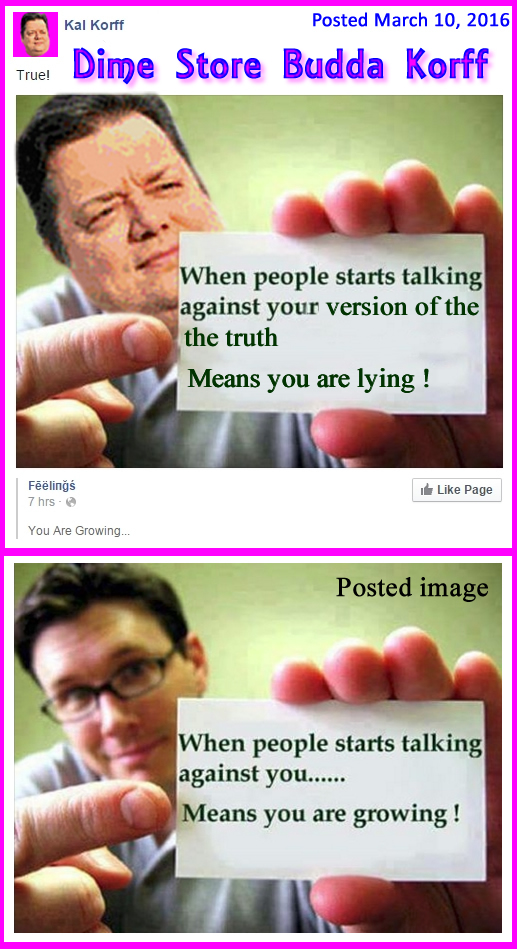 Kalvin Karton Korff, living in the past. 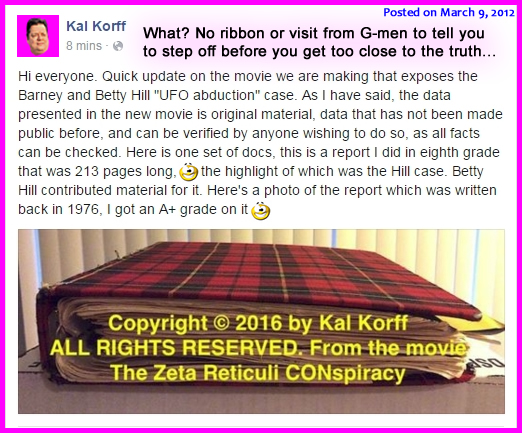 Kalvin had hoped that he could
change his future by running off to India.

It didn't work and it won't, for the rest of his life.


Korffer, Andre sent this confirmation into us after another Korffer made this video. Good work, Korffer's.

Gili Ganani, 19, a black belt in Krav Maga, appears to be striking powerful blows for female self-defense; in fact, it’s all staged ‘to raise awareness’

A female Krav Maga instructor on Tuesday posted what appeared to be security footage from a bar, which showed her beating up three guys who harassed her. The footage had been viewed over 200,000 times on her Facebook page by Wednesday evening.

But the apparent spectacular assertion of female protection turned out to have been staged — to encourage women to learn self-defense.

Gili Ganani, a 19-year-old Israel Defense Forces soldier, uploaded the video to Facebook with a caption reading: “I appear in this clip from security footage in a pub. I waited for friends, and some [people] decided to take advantage of the situation.”

In the video, Ganani is shown spurning the advances of a man at a bar. When she returns from the bathroom, the man grabs her hand, and she shrugs him off. He proceeds to grab her by the neck — at which point Ganani unleashes her Krav Maga skills and beats him up, as well as his two friends, who also lunge at her.

Thanks to my trainer Guy Dar KMM, who taught me how to get out of these situations,” she wrote. KMM stands for Krav Maga Maleh, or full contact Krav Maga.

The video then went viral, and by Wednesday morning, Ganani admitted it was fraudulent.

“It’s important for me to clarify that I am a black belt, have been training for many years in Krav Maga and am a certified instructor, but the clip is fake,” she posted, praising those who “noticed.”

Ganani said the purpose of the clip was to raise awareness “about the importance of self-defense for women and men.”

“Especially at this time, when every day we hear about harassment (and not only against women),” she wrote.

Read the Original Article at The Times of Israel 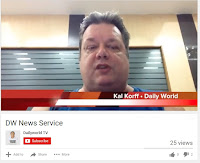 Well folks, Little Kalvin has moved away from his radio monologues (a radio show which he claimed was picked up for major syndication) and he's moved onto playing TV News Broadcaster for his Global News and Media Outlet. Would you like to watch more? We thought you might....

By the way, a number of Korffer's subscribed to this Global News Media Outlet's e-paper, using e-mail addresses NOT used for Korffing. So far, not a single person has received the e-paper. Way to go Manish, you've got a handle on this thing.

The Syndicate is very happy that Korff is re-energized and willing to put himself out there on video. We've been waiting for this entertainment to hit the web again since 2011. Look for Syndicate edited Korff videos to be posted soon.

A note to Kalvin, you may wonder why you haven't be able to stop our efforts. What we do is called satire Kalvin. Is it truth, fiction or a mixture of both or none? Your efforts are viewed in exactly the same way.