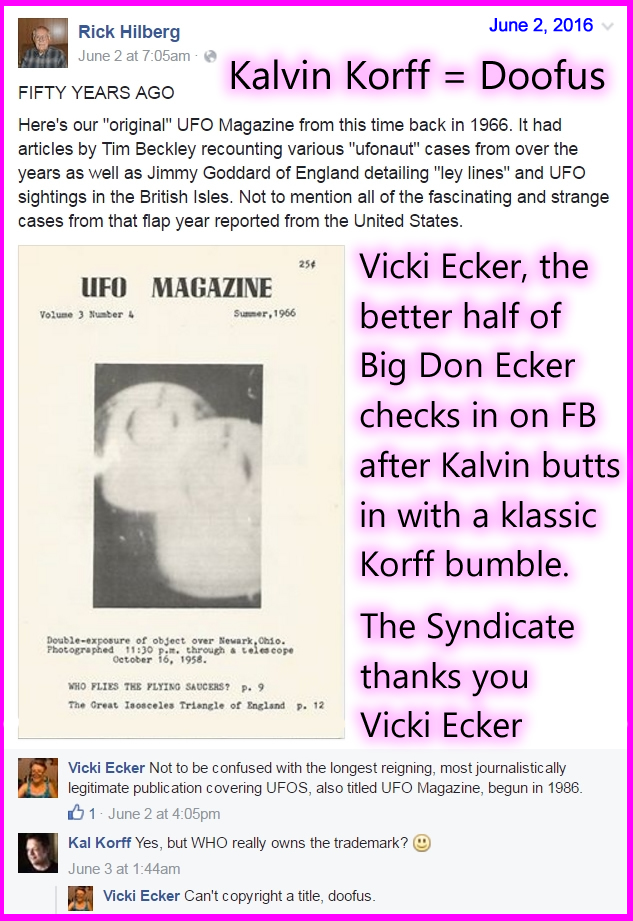 Notice that Korff tries to soften his "blow" with the Smiley Face.

Didn't work did it you passive aggressive motherfucker.

Nice new thread there Webmaster. So typical of Korff, running his big flapping mouth way before he puts his brain into gear, mouth flapping without a clue, just to hear himself talk. He must think there are still people out here in computer land that take this oaf seriously. Korff when will you ever learn? You are really one of the biggest jokes on the entire world wide web. What a DOOFUS! What a KLOWN! What a Frigging BLOWHARD! The famous internet Colonel with his Fabulous SPECIAL SECRET SERVICES, an Israeli founded organization!

Kal, I know you read this blog religiously and froth each time. Everyone knows you're bat shit crazy. Nobody takes you as anything more than the ass end of dumb. This blog has thoroughly exposed you a lying, scheming, narrow minded narcissist who didn't amount to anything and is an embarrassing oddity. I see you're now trying to stir it all up with your latest FB post. You're probably famished for some kind of attention since you weren't able to hit it in India by trying to get famous there hoping to fool people in yet another foreign country you've had to run to. We get it, Kal, you're a coward who can't face anyone. You need to instigate some sort of rivalry and make it public while trying to scare people. Well, those days are long gone, you stupid fat fuck. Everyone is on to your game, except you.

I give you the great Kernal Doofus. LMFAO I can't wait until Kal holds up his eighth grade science ribbon and proclaims himself smartest person in the room. The guy truly is a lowly piece of shit.

I wonder how many times a day that lard assed turd drops by here to check on all this love directed at his lazy ass? I really do wonder .. bet its a bunch!

kal you just can't do anything right, can you

You are scum, Korff.

Look at this way, Kal, if failures were gold you'd be rich beyond your wildest dreams.....but you're not. You're living off your mom. She must be as crazy as you, Kal, because most parents expect their adult children to have the ability to make a living for themselves. Yet, here you are, Kal, a crazed man-child still sucking off the tit. Pathetic.

Looks like the other half of the shitbag Korff brothers got arrested again. A bit old I think it demonstrates what sort of degenerate assholes these morons are. Not even a year ago. But Kal painted such an innocent picture of his beloved brother. LOL sounds like a family of criminals to me. Kal steals ans swindles while his brother Kurtis looks to be in the drug trade.

Eleven subjects were detained at the residence, including one that was transported to Three Rivers Hospital for ingesting an excessive amount of narcotics in a locked bedroom while the search warrant was being served.

Seized from the warrant was approximately five ounces of methamphetamine, one ounce of heroin, US currency, digital scales, packaging material, multiple prescription medicine, stolen property and other items of evidentiary value.

Anyone with information regarding suspicious drug activity in Josephine County is encouraged to call the RADE tip line at (541) 955-6970.

Kurtis on the horse.

What do ya fucking know? The very last photo I saw with the Dirt Bag Brother, I said to my Bud .. looks like ol' Kurtis is Riding that Horse. Guess I was right.

Pathetic losers. However, the sister, I believe, lives an utterly blameless life.

I'm surprised Kal slithered out of his hole to take this little jab. It's easy being thousands of miles away and flapping your fat face, isn't it Kal? Nothing builds courage like distance. Kal, you're a fucking pussy and a petty bitch. Don Ecker already owned you a thousand times over. Poor, dumb, 3 inches hard Kal. He's just jealous because Don was actually in the real military and fought in a real war. Kal's biggest tour of combat aside from targeting which McDonald's to eat out of stock? Paintball. That's it, Kal, grab your pussy and run home to mommy.

And Big Don has a real wife.

Not an inflatable doll from the Indian Princess Harem Girls line of personal pleasure companions by K-Tel. Just $79.95. comes with one easy to remove harem girl costume and an 8oz tube of Easy-Glide to simulate those intimate moments.

Well Kolonel Kornhall .. with this most recent Islamic Outrage ... I must note ... you and the celebrated Special Secret Services have really fallen down on your fat ass and have done nothing. I must say cottage cheese ass, I am greatly disappointed in you and S-3's track record..

Fuck you Kalvin, you piece of shit ... fuck you.