Is Kal K. Korff letting business get in the way of accountability?

A few days ago I asked why it was not ok for some to call people like Kevin Randle "credible" but it was ok for others. Kal K. Korff has said people referring to this Kevin Randle fellow as credible are committing consumer fraud. Oddly enough the person who runs a radio show called Xzone named Rob McConnel had Kevin Randle as a guest on the show and Rob McConnel said Kevin Randle was credible.

So why does Kal not accuse Rob McConnel of committing consumer fraud as he has with others who have said Kevin Randle is credible?

Kal says he is the "bureau chief" for this Xzone show. Kal is given a regularly scheudled spot each week on the Xzone show. And then I found this and took a picture of it. 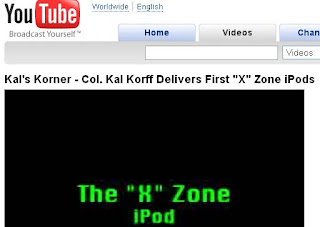 This Xzone show sells iPods and it appears that Kal might possibly have a business arrangement with this Xzone show to sell iPods. You can see this video for yourself.

If Kal does have a business arrangement with Rob McConnel then one might think it to be a conflict of interest for Kal as this Xzone show has a lot of flying saucer believers, bigfoot believers, ghost people, and the like on it.

So has Kal K. Korff sold out to make money and have a spot on a radio show or will he hold everyone to the same standards he claims to use on everyone? You cannot have it both ways Kal. If you are going to be a champion for consumers then you must be above any sort of activity that would present a conflict of interest.

I personally do not think Rob McConnel is committing any type of fraud but Kal must be even in his application of standards and this would include applying those same standards on Rob McConnel.
Posted by Kal is an idiot at Thursday, August 28, 2008

The "Colonel" is obviously mentally ill. So why does McConnell listen calmly to his ravings about counter-terrorism and the like (rather than backing nervously towards the exit) and talk without irony about "S3" heading to England to clear up some matter or other? What is McConnell's game here? What, for that matter, are Martina and other satellite acolytes up to?

I did 2 things today:
Contacted a friend at the Ministry of Justice about Kal's VISA
and I sent a complaint to You Tube about Kal's channel as it violates several of their policies.

I already sent a complaint to YouTube. I got zero reaction.

don't pull the You Tube stuff!

As expected, Kal did NOT show up for his 'Great Debate' with Kevin Randle on the xzone radio show tonight. According to Rob McConnell, an email from Kal said that he got a terrorist threat and had to pack up and leave!
Duh!!!