Reading the comments section it appears that Kalvin Korff's website has been HACKED! This is quite an EMBARRASSMENT and rather HUMILIATING for Kalvin after having bragged on several occasions of using an Israeli based secure server for email and the sort. Looks as though the Special Secret Service's IT department needs to hire more competent people.

But wait! Isn't Kalvin Korff a computer expert who was featured in a newspaper article, thus proving his computer genius??? Didn't Kalvin work on top notch computer projects because already mentioned newspaper article said he did??? Isn't this the same Kalvin Korff who penetrated the Iron Curtain's computer network by using Macintosh computers against the Kremlin's PCs because Kalvin said it was so and we could ask his mommy if we didn't believe him????

So where are you big computer skills at now Kalvin? Where is the might of the big bad Special Secret Services? This is TOO FUNNY! :) And we all know kalvin will be announcing that his website was attacked and he is yet again a victim. Better yet I think we can all expect Kalvin to claim the computer hackers were after important information from his server. What evil entity will Kalvin blame for what is clearly some computer geek joke?????

I'm laughing so hard over this I think milk just came out my nose!!!!!!!!!! Here is a picture I took the hacking!! see it for yourself 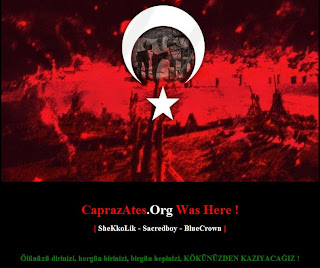 Can someone post a screenshot of the hackage? Is it defaced or just disabled? Even a picture of a nice 404 error notice would be delightful.

I think somebody just poked a hole in Kal's Hot air balloon!
Deflation is a terrible thing. Watch out for the powerlines on your way down! LOL

this is some funny shit right here! LMFAO!!!!!!!! Does anyone know what it says? I'd ask kal because he claims to speak so many languages, but we all know Kal is full of horseshit.

Looks Turkish, maybe PKK. Did Korff piss them off too?

This is a website defacement crew out of Turkey. I see Korff was rather quick to make an excuse on his index page, but the hack is still up.

You'd be wrong if you thought that this meant Kal's website had been hacked: http://www.criticalthinkers.org/index.php?option=com_content&view=article&id=145:confirmed-royce-myers-iii-to-receive-forensic-documents-from-washington-dc-proving-him-wrong&catid=1:latest-news

See, Kal is just "updating" his stuff (for the umpteenth time): http://www.criticalthinkers.org/

I see that hack Kal got hacked. ha-ha-ha. So how does a super dooper computer expert special secret services dude get his website hacked? I wonder if UFO watchdog has some friends in Turkey? Hmmmmmmmmmmmm

I bet you any money the great computer guru won't have a clue how to fix this.

Didnt he say he had deployed his Nanobot components into Turkey clandestinely? Or was that Pakistan.

Squonkomatic - allow me to quote:

"Nanotechnology is being used now to help eliminate terrorists. It is truly one of the last, and final frontiers where this war can be fought and still won. It is currently being deployed in Pakistan right now and Afghanistan, under my initiatives and in operations that I command."

I'm sure, however, that with his $25 million budget (boosted by his takings from iPod sales), the "Colonel" will have no difficulty in extending his operations to Turkey in order to deal with this minor annoyance.

I see that KKK is a scheduled guest on The 'X' Zone tonight. It should be interesting to hear who he blames for this latest round of computer hacking. I'll have to listen in. www.xzoneradio.com. I can't wait!

Not to come off as too paranoiac but I'd be mighty wary of visiting Korff's websites after this. He obviously does not have total control over who has access to his servers and thusly does not have total control over what people might place on his servers. Something like a funny grafitti picture is one thing, but there are all sorts of nasty little executables and cookie type devices that your web browser might accept and download that could seriously compromise your own individual security. I have been working as an online retailer for five years now and have personally seen the lengths that people will go to in the efforts of stealing personal data, infecting computers, re-directing unwary surfers to malignant websites, outright hacking and computer hijacking, you name it. I have personally been "cyber assaulted" six times and take it very, very seriously: I've had my identity compromised, had my personal information looted and seen people try to hijack certain secure accounts claiming to be me. It's all fun and games until somebody is trying to get a Visa Platinum card in your name and the bank calls you to confirm that you've moved to Estonia.

Korff himself might not even be aware that it would be going on, he obviously was/is using very low level encryption/anti-intrusion technologies, plus I am satisfied of the documentation that he is just plain stupid and may not have been using basic common sense tactics to safeguard the integrity of even his fanbase of visitors, like logging the IPs of visitors and requiring a login for basic access so he can keep track of who is doing what on his website. He's also using a bizarre form of HTML/VRML that I had never seen before that mutates the page design from visit to visit and suggests that security of his visitors really isn't a priority to him. He's trying to "show off" which is probably exactly why these guys in Turkey (or are they just pretending to be from Turkey to spoof their real point of origin?) decided to fuck with him.

Remember the name of this blog: KAL IS AN IDIOT, and with the way that internet chicanery is running rampant these days I would seriously not trust Kal K. Korff to have constructed a secure, safe web domain to visit. If you've been to his websites and your browser has the capacity wipe your personal information and dump all cookies. If you use anti-piracy software get the latest update and run a system check just to be sure. If you use a Mac don't be complacent based on the old "nobody hacks Macs" myth: They are just as vulnerable to attack these days as Windows based operating systems.

I am not saying that Korff's websites are infected and that malicious individuals are using his domain to prey on his visitors, sympathetic to Kal or no, but after this hacking incident I would be god damn wary about visiting his domains at all and would take steps to ensure my safety & privacy if I was. I haven't, been but did so anyway after seeing someone start spamming another discussion forum I participate in within 3 minutes after I logged in their last night. Within an hour this identity had clogged up about 40 discussion threads and was apparently trying to clog up the entire system. The admin was alerted and responded by IP blocking the person, whom it turned out was supposedly located in Bejing and spamming a picture link to website selling cheap Nike gear.

I love all your posts, Squantomatic. They are fascinating.
Jimmy D

squonkamatic:
Glad you brought the subject up. I did a little test from Kal's website the other day, and something raised my suspicions. Won't go into detail, but guess what I found on my hardrive as a result? Not one, but 7 cookies and 3 Trojans. Took me a while, but they are no longer there.

Clearly, this is for counter espionage by the Israeli special secret services.

OR... Kal Korff has little ticking timebombs that will go off when he wants.

Which would explain why my other PC had so many other problems after visiting Kolonel Kolostomy's website.

There you have it, "Colonel". F1 Racer's real name is Francis Underwood and he lives in Letna, here in Prague. What more info do you need, "Colonel"? Now either you inform the police, or "S3", or whomever, and have them deal with him, or cease and desist with your braying, bullying threats once and for all. Got it? "Colonel"?

Since Korff is apparently a steadfast Apple/Mac user I doubt he has the wherewithall to write his own trojans. Usually you work to infect that platform you are familiar with so maybe we should look for some little Hypercard bugs too. But seriously, I doubt that Korff himself infected his site, he probably is of the opinion that nobody on the internet would want to hack him because he's a hero to computer dweebs the world over for having invented the hyperlink. What this guy probably doesn't know is more ominous that what he does at any rate, and cheers to Jimmy D. and Don Ecker for their propz. This has been the most fun I've had goofing off on the internet since Doom 3 turned out to suck. I call it KORFFING; gotta get in some good Korffing every other day at least.

Kal was a no show on the X Zone Thursday. I'm sure the raving lunatic will be back on next week, but I find it funny that Kal has avoided the X Zone after Don Ecker played that Art Bell bit on the air. And yes, Kal's website was indeed hacked and the fuckwit still hasn't figured out how to fix. As with all of Kal's promises, his website is still down and it was supposed to be back up this evening.

Another no-show for Korff. And I waited up 'til the wee hours to hear his latest discourse! Nothing new. He's done that quite a few times over the past few months. The poor host has to alibi with his 'technical difficulties' bit.
Maybe he was out of town negotiating a peace agreement between Russia and Georgia?

It appears I have been banned from commenting on Kal's You Tube profile. Anyone else have this problem?

I've been expecting to be banned from being able to comment there for a while. YouTube blocks all posts that contain any kind of URL language and you can only use so many letters at a time. I doubt Kal is going to block anybody, the way he looks at it our comments are just proof of all the "haters" out there which re-enforces casting himself as a victim. He'd also would have banned F1 Racer and KalIsAnIdiot long before he'd get to us. Unless of course he just lowered the boom to against everyone to try and keep word of this hacking incident from becoming public.

Did YouTube give you a message saying "This User Has Blocked Your Comments", or did it just say "There Is A Problem With Your Comment" or "Please Check Your Comment"?